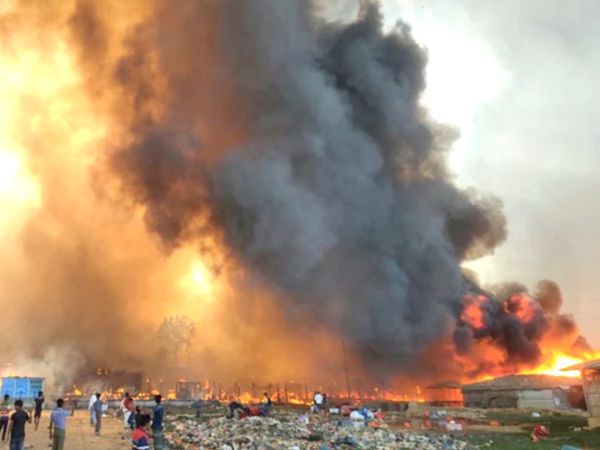 Bangladesh News – According to information received by World News superfast, thousands of temporary houses were burnt down due to sudden fire in the world’s largest Rohingya Muslim settlement late on Monday night.

The fire broke out in the Balukhali camp in the Cox’s Bazar area, which spread to a much larger area in a short time. According to local authorities, 15 people have died in the incident so far. At the same time, more than 400 people are missing.

Refugee camps made of plastic sheets

The temporary accommodation in the refugee camp is made of tents, plastic sheets and thick polyethylene sheets. The reasons behind the fire have not yet been ascertained.

United Nations Refugee Agency spokeswoman Luis Donovan in Cox’s Bazar has said that the rescue teams became active as soon as the accident was reported and they saved a huge loss of life and property. According to eyewitnesses, many refugees are feared dead in the accident.

According to information received by the World News superfast, the United Nations said on Tuesday that the houses of thousands of Rohingyas in the world’s largest refugee settlement in Bangladesh have been destroyed by fire.

More than a million Rohingya refugees who fled Myanmar in 2017 live in Cox’s Bazar and the camps around it. The United Nations and many Muslim countries help them in living and eating.