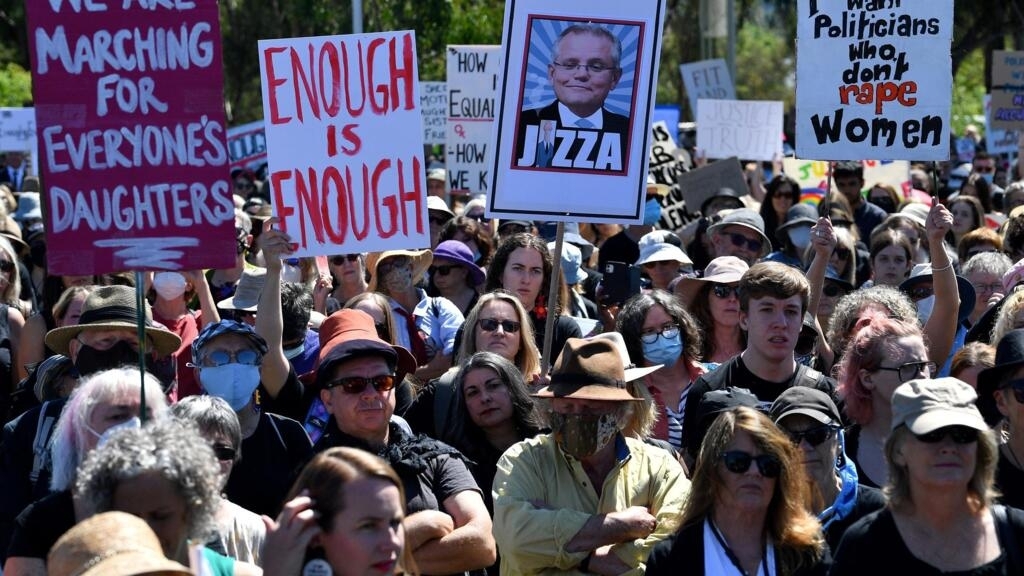 Cascading scandals of alleged rape, sexual misconduct and discrimination inside Australia’s parliament have destabilised the conservative government as accused ministers are sidelined and assault victims, women’s groups and female politicians demand a shakeup of what they describe as an endemic culture of ‘toxic’ masculinity within politics.

Repeated reports of sexual misconduct, abuse and harassment of women by Australia’s political elite have triggered the biggest mass women’s rallies the country has seen. Using the #March4justice hashtag, hundreds of thousands of women gathered all over the country in a second-wave #Metoo moment that galvanised women – from the very young to the elderly – and from all political stripes.

At the march on the capital, the wives of former prime ministers Malcolm Turnbull and Kevin Rudd stood hand in hand in a show of solidarity with Australian women, despite their allegiances to opposing political parties.

But by Monday, the fury unleashed at the March 15 demonstrations boiled over as Prime Minister Scott Morrison announced that two of his ministers caught in the eye of the storm of the Canberra allegations – defence minister Linda Reynolds and attorney general Christian Porter – would lose their high-profile portfolios but remain part of the cabinet.

The PM’s decision not to force the implicated ministers to resign has played into public perceptions of an entitled political class.

Professor Catharine Lumby, a researcher and consultant on workplace cultures at Sydney University, says that like many countries, Australia has huge issues with sexual assault and harassment that have been ignored for decades despite women consistently raising them.

“Unfortunately there is a culture of masculinity in this country that can be toxic,” Lumby says. “There’s what’s called a ‘rape myths acceptance’. What that is about is men placing blame on women for their decision to sexually assault, thinking ‘Well, she deserved it, she was drunk or she was wearing provocative clothing.’ The reality is there’s a deeply entrenched culture of misogyny among our so-called leaders and it’s born out of a culture of entitlement and privilege.”

Lumby’s assessment is reflected in the shocking and widespread allegations of abuse and mistreatment of women that have emerged from the highest political offices in the country.

Porter has denied the allegations and launched defamation proceedings against Australia’s public broadcaster ABC, which first aired the claims.

Another MP, Dr Andrew Laming, accused over the weekend of ‘upskirting’ and other inappropriate behaviour towards female staff and constituents, has agreed to undergo empathy training.

But it was the story told by a former young staffer to the government, Brittany Higgins, that first burst the bubble shielding Canberra and the several male ministers and staffers whose transgressive behaviours had been allowed to go unchecked. Higgins went public on February 15 with accusations that a senior colleague had raped her inside a government minister’s office in March 2019.

Higgins, who was 24 years old at the time of the alleged rape, said she did not receive adequate support after she reported the incident and that she was called ‘a lying cow’ by then defence minister Reynolds. The minister was forced to apologise and is to pay damages to Higgins. Since Higgins went public, three other women have come forward to accuse the same man of sexual assault or harassment.

The accusations prompted the PM to deliver an emotional apology in which he credited his wife for giving him ‘perspective’: “She said to me, ‘You have to think about this as a father. What would you want to happen if it were our girls?” Morrison told a press briefing.

His remarks caused a public backlash and led Ms Higgins to issue a statement saying that “the continued victim-blaming rhetoric by the prime minister is personally very distressing to me and countless other survivors”.

In comments he made later, Morrison said he had been hearing stories in which he learnt that men in power do not view women as equals. He said he had been “listening carefully” to female colleagues and friends “about the issues and the traumatic things that they have had to deal with”.

“I have heard that women are overlooked, talked over, by men, whether it is in boardrooms, meeting rooms, staff rooms, in media conferences, in cabinets, or anywhere else,” he said.

Many read the prime minister’s messages as indicative of a political class out of touch with grievances of inequality, sexism and casual misogyny women say are systemic in politics. One former conservative MP, Julia Banks, went so far as to describe the workplace culture in Parliament House as the “most unsafe in Australia”.

“It’s a problem when men have to default to women to explain [that] rape is wrong and sexual harassment can destroy women’s careers,” Lumby says of Morrison’s admission he consulted his wife to better understand Higgins’s rape allegations. “Women are not here to explain to men why this is wrong.”

Virginia Haussegger says the collective action by women is a crystallising moment affecting every single woman in Australia.

“This is about all of us,” says Haussegger, founder and chair of the 50/50 by 2030 Foundation, at the University of Canberra. “The profound failure of the prime minister and every minister in his cabinet to understand that point is, frankly, breathtaking.”

She said she could barely read some of the heartbreaking testimonials pouring out from women that just keep coming “in texts, online posts, phone calls and even official emails from the boss addressed to “Dear Colleagues”.

Those who have shared their experiences of discrimination, inappropriate behaviour and the seemingly pervasive ‘toxic’ culture amid the corridors of power in the capital are among Australia’s most senior and well-respected former and current politicians, including the conservative former deputy and foreign minister Julia Bishop and Australia’s youngest former elected federal minister, Kate Ellis.

Ellis, who in 2007 became the youngest serving federal minister at the age of 30, is the latest female former minister to reveal details of the harassment she was subjected to and is gathering stories from other women politicians for her book, “Sex, Lies and Question Time”.

“I’d only been an MP for a couple of weeks and we were out for drinks and this Liberal [conservative] staffer quite aggressively just said, ‘Kate, the only thing anyone wants to know about you is just how many blokes you f***ed in order to get into parliament.’

Ellis says weaponised gossip was designed to derail her career in parliament. She said she was forced to defend herself against false claims she and her female staffer were each having a sexual relationship with a male government adviser. A parliamentary insider had fed the rumour to a major newspaper that was going to publish the false story and claim Ellis’s love triangle was “destabilising” the government.

“I would be labelled as a slut and as someone who isn’t really up for the job,” Ms Ellis told ABC’s the Australian Story.

Greens Senator Sarah Hanson-Young describes the atmosphere in Australia’s Parliament House as one of “deep tribalism” and “aggression”.

“I’ve had names of men that it was rumoured that I slept with whispered to me as they walk past me in the [parliamentary] chamber, as we’re sitting down to vote. All those things that are designed as mind warfare,” the senator said.

The level of impunity afforded her male colleagues came to the fore in June 2018 during a heated debate over a motion on violence against women. A male colleague yelled to Hanson-Young from across the Senate floor: ‘You should stop shagging men, Sarah’.

Hanson-Young sued for defamation and won. Yet, evidently, the culture of impunity prevails.

“Once you start to unpack the systemic, deliberate and sustained disempowerment of women and girls, peel away at the misogyny beneath it, once you start to see it in stark contrast to the privilege of being male, well, you can’t look away. Is it really any wonder women are angry?”

Revelations of misogyny within Australian politics were famously flagged in an incendiary speech by former prime minister – and the first woman to hold the post – Julia Gillard. In October 2012 Gillard took her opposition counterpart, Tony Abbott, to task over his misogynistic attacks against her and attempts to undermine her leadership.

Gillard was denigrated on the lawns of Parliament House ten years ago when Abbott was photographed delivering a political speech in front of anti-Gillard placards that read “Ditch the Witch”.

Gillard’s misogyny speech has become a global clarion call for a new generation of feminists after teenage influencers sent her speech viral all over again, miming her words against a rap-inspired soundtrack and sharing their versions on Tik Tok.

The besieged prime minister is under ever-growing pressure to fix the ‘toxic’ culture marring politics and has already promised a workplace review of parliament as well as on Monday announcing that seven women would be occupying Cabinet roles, a record number for the current government.

Morrison insists that those accused should not be tried in the court of public opinion, but that any investigations be subject to due process. As for his own political survival, it will indeed be up to the court of public opinion. A Newspoll conducted for The Australian newspaper on Monday showed the prime minister’s popularity dropped to 55 %, the lowest level in a year. Were an election to be called suddenly, his government would be likely ousted from power.

Lumby favours mandatory quotas and supports moves by the prime minister to get more women into leadership roles. But, she says, there’s no easy fix. “Cultural change is slow. Far more than awareness raising, it is about embedding the concept that women matter and that they have human rights the same as men do.”

“There’s a real cultural reckoning taking place. The good news is women are angry and what’s changing is women are saying loudly, ‘We’ve had it and this has to stop’. The pot’s boiled over and women aren’t cooking.”