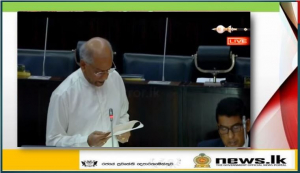 The Foreign Minister, Dinesh Gunawardena states that despite the assertions of external parties, the Government will safeguard human rights while ensuring the economic and political stability of Sri Lanka.

In simple terms, Minister Gunawardena said that Sri Lanka is a sovereign state and the Government will protect that sovereignty.

The Foreign Minister asserted this at the Parliament today (25) while delivering a special statement regarding the UNHRC resolution.

The Minister pointed out that that the Government has rejected the resolution and had already informed its withdrawal from an earlier document tabled at the Council co-sponsored by the former Government.

He said the Sri Lankan Government will address accountability issues in Sri Lanka through a domestic mechanism.