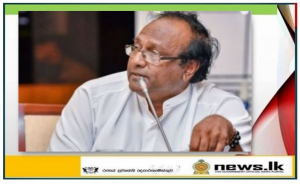 Public Security Minister Sarath Weerasekara asserted that a separate panel, committee, and a team of STF members have been appointed to investigate environmental damage including deforestation.

The Minister further added that arrangements have also been made to monitor environmental destruction with the assistance of the Navy and Air Force.

The Minister said this responding to a question raised by a journalist at an official function organized in line with the “Wari Saubhagya” program held in the Kolonnawa electorate.