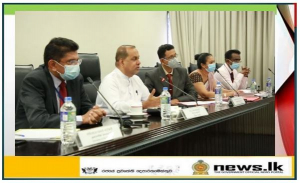 The Minister of Environment Mahinda Amaraweera, proposed at the Ministerial Consultative Committee on Environmental held recently in Parliament to establish a special unit that can act expeditiously and efficiently in the current context of controversy in the country regarding the destruction of the environment.

It was suggested at the meeting that the unit should include responsible officials from the Ministries of Environment, Wildlife, Forest Conservation, Public Security as well as government agencies such as the Central Environmental Authority.

At the same time, it was decided at this meeting to set up a new media unit to prevent the circulation of fake news in the country regarding environmental destruction and to pay more attention to the important news presented by the media.
The above decisions were taken at the Ministerial Consultative Committee on Environment chaired by the Environment Minister Mahinda Amaraweera, and the issues that have arisen island wide were taken into consideration. In particular, due to the issues that have arisen with regard to sand mining, the purchase and sale of sand will be done by a state-owned technology company as a solution, the Minister said. Accordingly, low income Samurdhi beneficiaries will be given the opportunity to collect and sale sand.

In addition, the Minister said that a formal program is being implemented to stabilize the price of sand in the face of rising sand prices and steps will be taken to regularize it by obtaining more deposits from license holders in sand mining.

At this meeting, MP Jagath Pushpakumara, drew the attention of the committee to the illegal sand mining taking place in the Thanamalwila and Buttala areas in the Moneragala District. Minister Amaraweera recommended to the Ministry officials to send a special team to the area to take legal action against the culprits and submit a full report on the matter.

Members of Parliament Charles Nirmalanathan, Thavaraja Kalai Arasan, Manjula Dissanayake and Kapila Athukorala, Dr. Anil Jasinghe Secretary to the Ministry of Environment along with a group of senior officials of the Ministry were also present at the meeting.