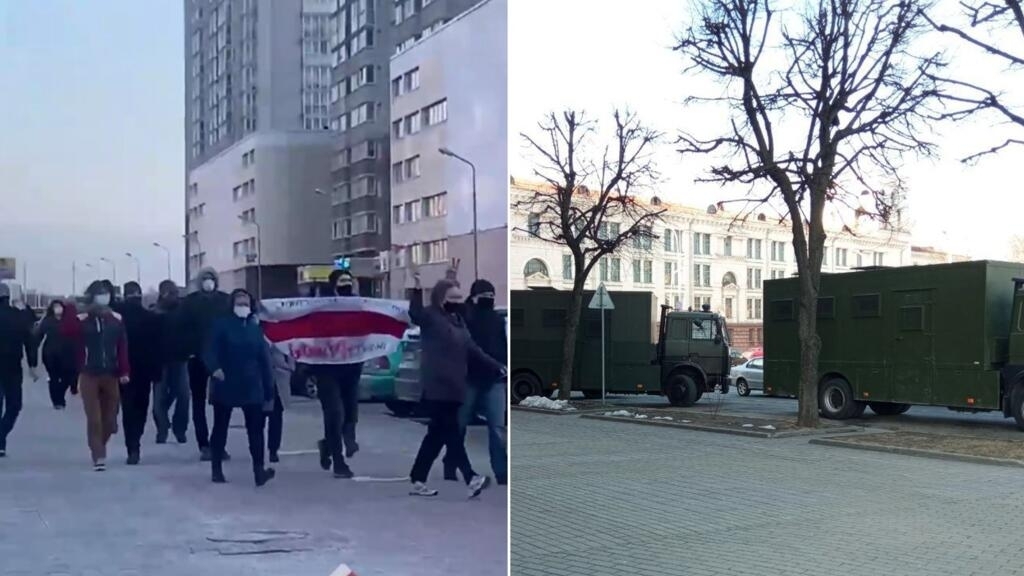 When the Belarusian opposition leader in exile, Svetlana Tikhanovskaya, called for protesters to take to the streets on Freedom Day on March 25, only a few brave souls responded. Police flooded the streets of Minsk, as the government led by President Alexander Lukashenko continues to clamp down on opposition across the country. Our Observer describes a day coloured by fear of arrest, with very few flags, posters or shouted slogans.

The night before the protests were set to take place, videos showing security forces gathering in Minsk were already widely circulating on Telegram channels populated by members of the Belarusian opposition:

This video was published on the Telegram channel @belarusseichas on March 25. It shows vehicles belonging to the security forces gathering in the centre of Minsk.

As the day went on, more and more videos appeared showing police patrolling the streets:

This video was posted on the Telegram channel @belamova on March 25. The caption reads, “Look how the security forces march in groups. It seems to me that someone is very afraid.”

Other videos show small groups of protesters gathering nervously in the streets of the capital, like this one, which was filmed in a residential neighbourhood:

In this video posted on the @belamova Telegram channel on March 25, you can see several dozen protesters, some of them carrying the white, red and white flags of the opposition.

The Belarusian opposition started celebrating Freedom Day on March 25 back in 1989. The date marks the anniversary of the creation of the first independent Belarussian republic in 1918, which was overthrown a year later by the Bolsheviks. The opposition movement against President Lukashenko chose the white, red and white striped flag of this short-lived first republic as their symbol.

This year, the government banned protests on March 25, citing coronavirus and “calls to extremism” that had been circulating on the messaging app Telegram. In the capital city, there were more security forces than protesters in the town centre, according to Belarusian media outlet Tut.by. More than 200 people were arrested, according to numbers provided by the Ministry of the Interior.

‘It was an anxiety-inducing atmosphere, I didn’t feel safe’

Our Observer, who wished to remain anonymous, was one of the people who braved the ban. An active participant in the protests against Lukashenko in 2020, our Observer said that the protest on March 25 was very different from the large-scale gatherings last summer. Few people had the courage to turn out and signs, flags and slogans were almost absent:

I was in a small group with my mum and several friends. We started marching near the town centre, next to the Minsk Hero City Obelisk, where extremely important meetings have been held since August.

I didn’t have anything with me, just badges with Eve on it [Editor’s note: Eve is a painting that has become a symbol of the protest movement] and a white rose on my coat. The other people around me did the same. From what I saw on Telegram, anyone who was clearly wearing the colours white, red and white [Editor’s note: representing the flag of the opposition movement] was immediately arrested.

When we looked at the faces of the people marching with us, we understood that they were “with us”. They had courageous, open faces. They were smiling in spite of everything. From time to time, someone would cry out, “Viva Belarus!”, and everyone would respond loud and clear.

This video, which was posted on the Telegram channel @nexta_tv, shows a row of cars honking in the centre of Minsk as a sign of protest against the president. The caption says, “Lenin Street is roaring, too, like in August!”

Our Observer said that the massive police presence made her feel sick to her stomach and afraid:

There was always a large number of security officers around us, wearing different uniforms. There was a bus filled with police officers at each street corner. Buses filled with security forces were crisscrossing the town centre. It was an extremely anxiety-provoking atmosphere. I didn’t feel safe.

This video, posted on the Telegram channel @belamova, shows a group of police officers arresting two passersby in the centre of Minsk.

Personally, I was afraid. I went out without my phone, without anything, and I left a note at home with a list of things to bring me [Editor’s note: at the police station] if I were to be arrested. I went out and protested because I do every year on Freedom Day. I dream of being able to walk the streets of my town without being afraid.

>>> Read on the Observers: Women lead the protests against Belarus’s contested election despite violent arrests

There have been more and more arrests, and increasing numbers of protesters have been tried since last summer. Sometimes the repression becomes almost absurd. A 20-year-old woman was arrested for having worn white and red socks. The authorities increased the number of preventative arrests in the days leading up to March 25. Some Belarusians on social media said that they had been told they would be fired if they took the day off on March 25.

Our Observer knows many people who didn’t go out to protest but she said she doesn’t blame them, considering the level of violence and repression that’s been taking place over the past few months:

I know people who were out protesting last summer and autumn, but who didn’t come out this time. Some had been arrested, others can’t return to the country because they are afraid of being prosecuted. Some just didn’t know where to go. Others just couldn’t take such a serious risk.

Every week, the repression gets worse. People get arrested for wearing the wrong clothes, for having put up the wrong-coloured curtains [Editor’s note: red and white] or for having sent a message.

There are lots of political prisoners. The security forces have been raiding homes, picking them up at work or even in the street.

We aren’t safe anywhere. Our loved ones aren’t either. This kind of climate leaves its mark on people.

Despite everything, she hasn’t lost hope that her fellow citizens will rally again in the future.

On March 26, Alexander Lukashenko said that he had “treated the opposition with calm” on Freedom Day. The same morning, the Ministry of the Interior released a statement claiming to have thwarted a terrorist attack in the capital.

The re-election of Belarusian President Alexander Lukashenko on August 9, 2020 was contested by the opposition, who said that wide-scale fraud had cost opposition candidate Svetlana Tikhanovskaya the election. Up to 100,000 people took part in the protest movement that summer.