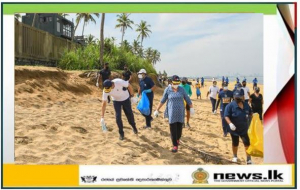 The main aim of the programme was to clean the natural coral reef extending northwards from the Kelani estuary and the neighboring shoreline.

In an attempt to completely eradicate plastic from our oceans, this timely initiative was set afoot with the ingenuities of ‘Oceanlust’ e-magazine. The project was also well backed by members of Men in Whites, a group of Navy veterans.

Today’s programme, set in motion by Commander of the Navy, involved Navy divers clearing plastic and polythene debris from the natural coral reef extending northwards from the Kelani estuary. Meanwhile, members of Men in Whites, their family members, naval and coast guard personnel, individuals from Marine Environment Protection Authority, Department of Coast Conservation and Coastal Resource Management, various government and non-government organizations and residents from the area broke a sweat to clean a 5km long beach area from Uswetakeiyawa to Preethipura on the sidelines of the main event.

The Navy regularly implements coastal clean-up programmes around the island with the aim of awakening the attitudes of the general public and gaining community contributions for such endeavours, having recognized the importance of coastal and marine resources. Further, it is also assisting other government agencies and civil society organizations when conducting beach clean-up drives.