Singapore — Many members of the online community have spoken out against an increase in public transport fares in light of two train disruptions this week.

According to the Land Transport Authority (LTA) on Monday, the North-South Line experienced a signalling fault between Newton and City Hall stations, causing delays during the morning rush hour.

It added that affected commuters experienced a delay of about 45 minutes.

There were no train services between Toa Payoh and Marina South Pier for about 10 minutes after SMRT and Thales engineers reset the system at about 10 am.

On Sunday, train service was disrupted on the North-East Line due to a power fault at the overhead catenary system at Buangkok station, which was caused by a faulty insulator, said the LTA, adding that the issue took three hours to fix.

While the LTA said that having two train disruptions over two consecutive days is “very unfortunate and frustrating”, netizens were concerned for different reasons.

Many took to social media calling out Transport Minister Ong Ye Kung, who said on March 5 that the Government will continue to subsidise rail and bus operations, but the bill to taxpayers “cannot keep ballooning”.

“Train fares so far are not enough to cover these operating costs,” he said, adding that the situation is the same for buses.

Netizens called the possible fare hike “shameful”, adding that only the common man relied on public transport and would feel the pinch of fare hikes the most. 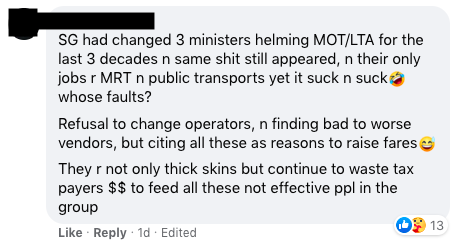 Send in your scoops to news@theindependent.sg