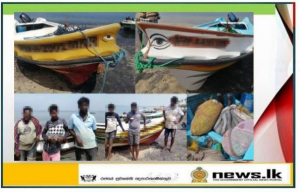 Naval operations carried out in Eastern, Northern, Northwestern and North Central Naval Commands in the past 02 weeks led to the seizure of 10219 sea cucumbers illegally harvested through night diving and apprehension of a group of individuals and diving gear used for this illegal act.

Sri Lanka Navy has increased its day and night patrols covering the seas around the island in an attempt to prevent adverse effects on the marine environment, due to illegal fishing practices by a handful of individuals with scant regard in island’s waters.

Consequently, the North Central Naval Command, during patrols conducted in Walaipadu and Iranativu sea areas, managed to get hold of 6878 sea cucumbers that were illegally harvested by means of night diving. Further, 53 individuals, 11 dinghies and diving gear were also taken into naval custody during these patrols.

In separate developments, the Northwestern in Arippu, Kondachchikuda and Kalpitiya seas, the Northern Naval Command off Allapiddi and Eastern Naval Command during patrols in the sea area of Sallimunai had been able to seize 3341 sea cucumbers that had been illegally caught by night diving. These patrols also made way to apprehend 22 persons, 07 dinghies and other accessories used by the accused.

Apart from that, other naval operations carried out in Eastern, Northern, Northwestern, North Central and Southeastern Naval Commands from 16th February to 30th March 2021 led to the apprehension of 128 more individuals and seizure of 41 fishing vessels engaged in wide-ranging illegal fishing practices. Incidentally, these persons and their fishing accessories had been held for engaging in fishing without valid passes, using unauthorized fishing nets, possession of illegally caught shark and their fins, fishing in restricted areas and possession of illegally caught lobsters.

Meanwhile, all these operations were conducted ‍following the COVID-19 protocols in force to prevent the spread of the pandemic. The apprehended suspects along with the fishing vessels and gear were handed over to the Assistant Director of Fisheries in Trincomalee, Mannar and Muthur, Fisheries Inspectors of Kuchchaveli, Puttalam, Kalpitiya, Pooneryn, Silawathura, Jaffna and Kilinochchi, Police stations of Kalpitiya, Kayts and Trincomalee and office of Department of Fisheries and Aquatic Resources in Point Pedro and Pothuvil for onward legal action.