Last weekend, I brought my aunt, who is like a second mother to me, out on a well-deserved staycation at Sentosa.

Growing up, she would often bring me and my brother out on the weekends and treat us to little gifts.

Now, between juggling work and being the sole caregiver of my grandmother, she hardly has time for herself.

Thus, a little getaway for some rest and relaxation was certainly in order.

As my aunt prefers nature as opposed to city life, I felt that Sentosa would be the perfect location with its beaches, greenery and views of the sea.

Plus, where better to relax than by leaving the city behind in favour of an island resort?

We booked a package via Klook, which included a one-night stay in a Luxury Room at Sofitel Sentosa Resort & Spa, breakfast, lunch and dinner from S$460. Prices might differ depending on the date.

Though it was a weekday, the hotel was far from empty. 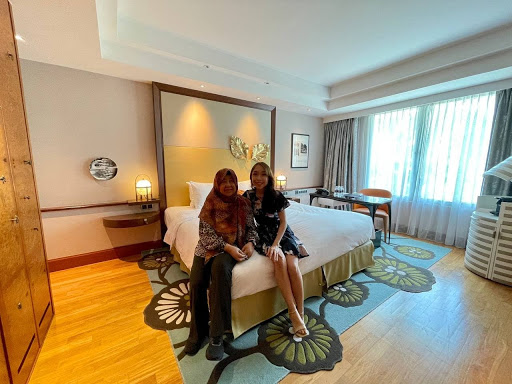 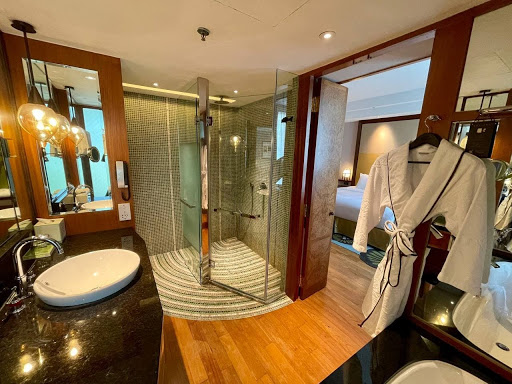 The room was spacious and came fitted with a large bathtub. Moreover, the wooden furnishings made the room feel comfortable and cozy.

After checking in, we decided to explore the hotel. We loved that there was so much greenery all around us. 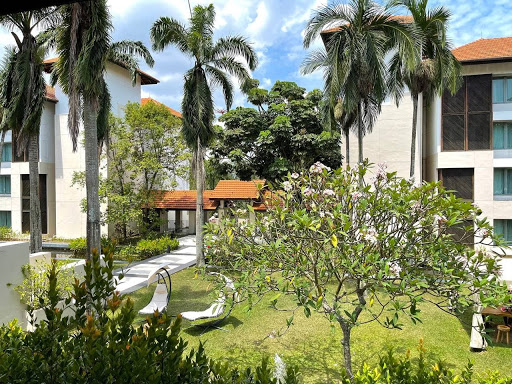 It was too hot for a swim, so we settled for lounging on the sunbeds by the pool. 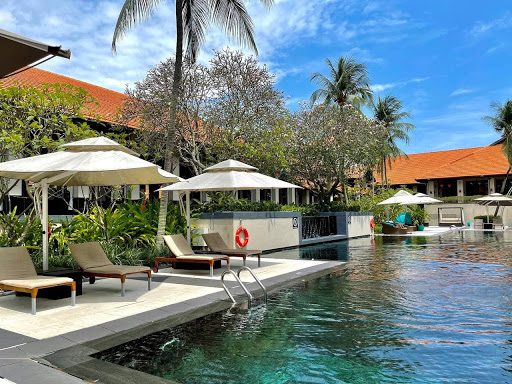 The staff at the hotel also recommended that we check out the Sofitel Spa, where you can enjoy a variety of massages and facial treatments.

Besides these, guests can also choose from an extensive list of manicure and pedicure treatments.

Hotel guests are able to make use of the other pool at the spa so you won’t be limited to just the hotel’s pool.

To get to Sofitel Spa, you will need to take the hotel’s shuttle bus.

A look at the spa’s pool: 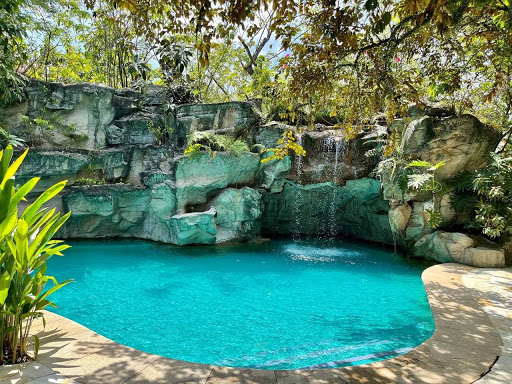 As we explored Sofitel Spa, we came across The Garden, a restaurant that is housed in a colonial-era building.

We decided to grab a bite here as we were drawn to its high ceiling and cosy ambience. This meal was not part of the Klook package, though. 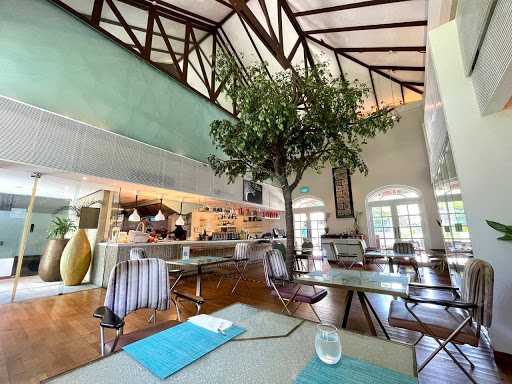 We chose a seat by the window, overlooking tall trees and greenery. 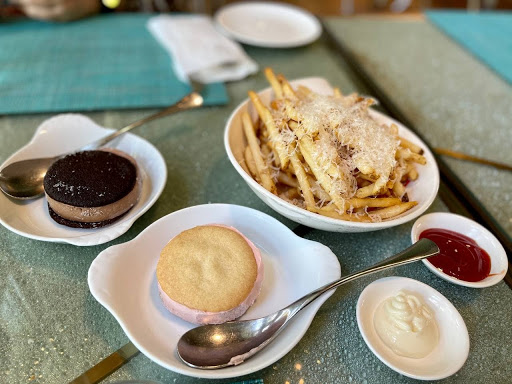 The portion for the fries was sufficiently large, which we appreciated.

At around 5pm, we departed the hotel to head to our first activity, the Gogreen Segway.

Getting around Sentosa was a breeze, since there is a free Sentosa Bus and Beach Shuttle linking various parts of the island.

The bus stop for Sentosa Bus B is conveniently located just outside the hotel.

We arrived at our destination in time for our 5:30pm booking for the 30-minute Gogreen Segway ride (S$39.90/pax), described as a scenic ride along Siloso beach and Palawan beach. 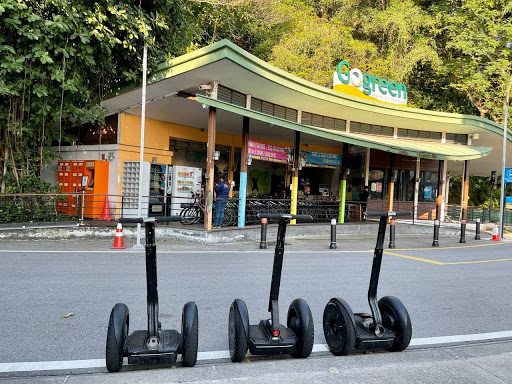 Each rider goes through a training session and a safety briefing before beginning the ride.

My aunt was initially apprehensive about trying the Segway, but after some encouragement, she decided to give it a try.

As it was our first time, we found the training to be very helpful and soon realised that it was not hard to control the Segway.

The staff also passed us shower caps (for hygiene reasons) and ensured we wore our helmets properly. The equipment and handlebars of the Segway are also sanitized after each use. Riding the Segway was so easy to learn that each of us only took around five minutes to complete the training session.

Before we knew it, we began our 30-minute Segway ride. For safety, we rode the Segway in a single line on one side of the road.

A staff member rode beside us to ensure that any vehicles would be directed accordingly.

We were lucky to catch the sun setting during our journey and it was truly a scenic ride. 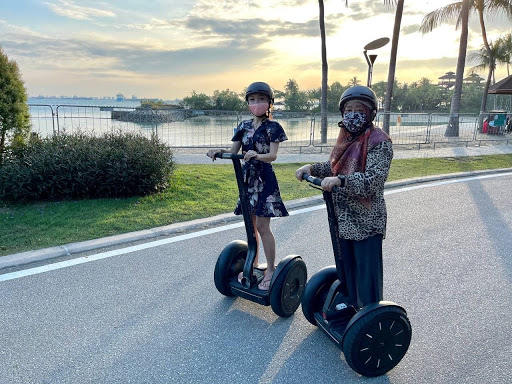 As we gained more confidence, we were able to go a little faster. It was exhilarating feeling the wind on our faces and taking in the picturesque view as we rode the Segway. 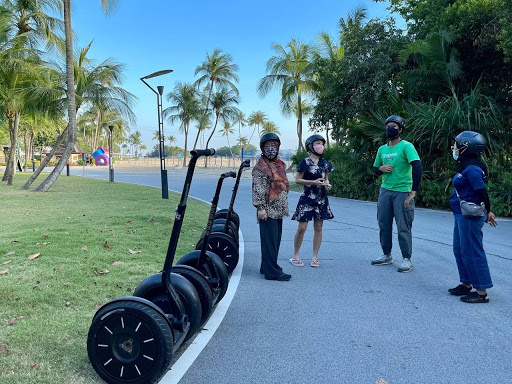 Throughout the ride, the staff took their time to explain to us about the various landmarks we passed by.

We also stopped halfway through our journey to take some photos.

My aunt enjoyed the experience and was happy that she was able to step out of her comfort zone and try something new.

During the ride, she would point to landmarks she remembered, such as Shangri-La’s Rasa Sentosa Resort & Spa, and recalled how she had stayed there a long time ago.

It made me realise how fast time flies, and the importance of spending quality time with our loved ones.

Along our route, my aunt was excited and made it a point to remember the new landmarks that were unfamiliar to her, like AJ Hackett.

My aunt also revealed that when she visited Sentosa over 10 years ago, there were no buses, so she was pleasantly surprised at how easy it was to get around now.

She also added that Sentosa looks so much more developed now, with plenty of restaurants and attractions compared to when she last visited.

The experience was certainly a breath of fresh air for her.

You may book the Segway fun ride via Klook here.

Dinner at The Cliff

As part of our Klook package, we had a three-course dinner at The Cliff, an Italian restaurant back at the hotel.

My aunt remarked how she could not remember the last time she had a three-course meal in a restaurant, as she often preferred to eat home cooked meals at home. 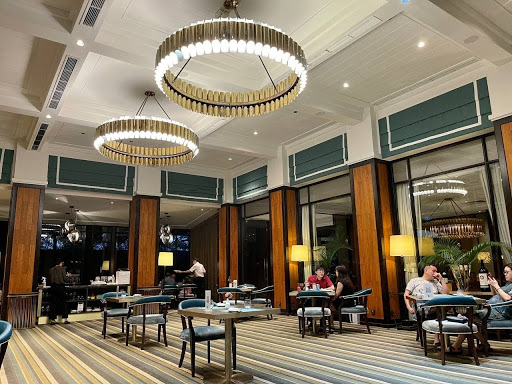 We were given the no pork or lard menu to choose from. 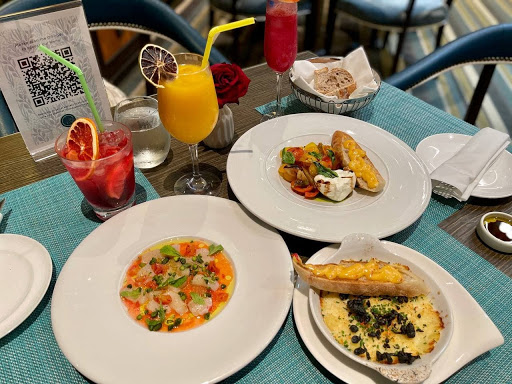 Our favourite out of the three appetisers were the scallops, which were fresh and served raw.

As we were not accustomed to eating three-course meals, we were pretty full by the end of the first course.

We were shocked when the pizza came, as it was large enough to feed two very hungry people, at the very least. My personal favourite was the spaghetti, which was savoury and creamy, though my aunt commented that she felt jelak after a while.

My aunt’s favourite was the barramundi which was crispy on top and juicy and tender inside. 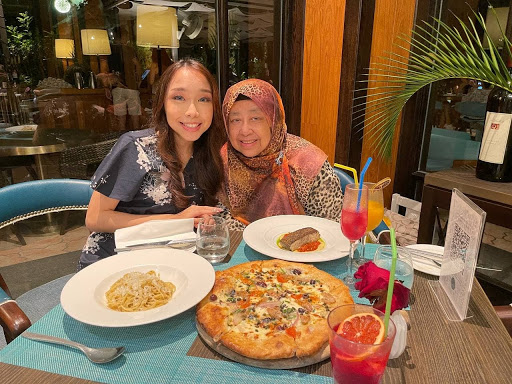 After dinner, we headed back to our rooms to get some rest.

My aunt remarked how much of an adventure the day had been, from the activities, to the atmosphere and even the food.

Trying out new activities and exploring Sentosa was something she previously never thought of doing due to her busy schedule, however, she said that she enjoyed it immensely.

At 9am the next morning, we headed for breakfast at Kwee Zeen, a restaurant in the hotel that serves Pan-Asian, Western and French cuisine. We were also happy to find out that breakfast was an a la carte buffet, which meant that we could order as much food as we liked. Breakfast has always been my favourite meal of the day, and this particular one did not disappoint.

Further, after a hearty Italian dinner last night, my aunt was more than happy to tuck into a more familiar cuisine.

The pancakes were soft and fluffy, and came slathered with generous layers of maple syrup.

The laksa on the other hand, was just the right amount of creamy.

Off to the Southern Islands on a Yacht

After breakfast, we enjoyed the beautiful sea view and the wind on our faces on a four-hour yacht charter booked via Klook for S$599, which my brother joined us for.

The yacht would cruise to Lazarus Island where it would stop for water activities.

My aunt had only ever been on a sampan, also known as a small fishing boat before. Thus, seeing a yacht for the first time was something new for her and she was extremely excited. 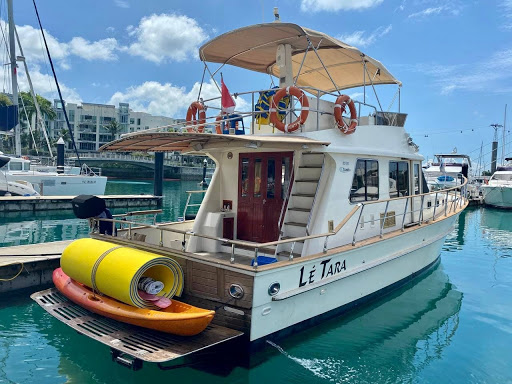 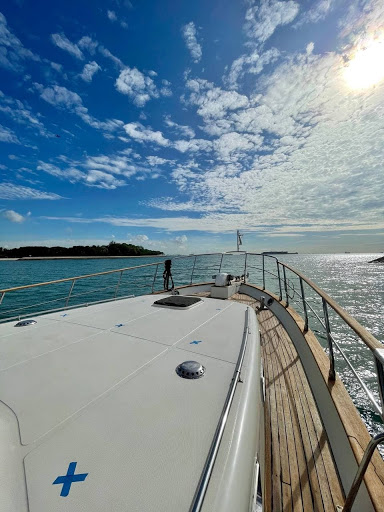 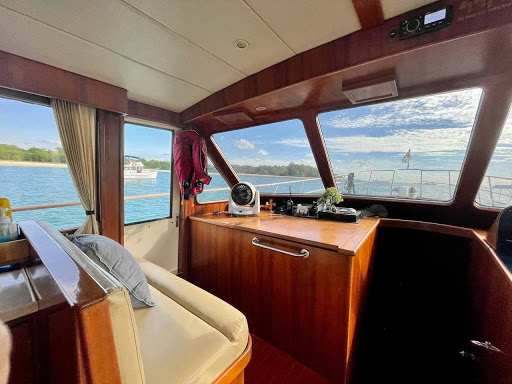 She was shocked that the inside of the yacht was air-conditioned, a pleasant reprieve from the heat outside.

The entire yacht trip was smooth and we could barely feel the choppy waters when we were inside.

She commented that the sampan was nothing like that, and recalled how she would get seasick often.

As we left from Marina at Keppel Bay, we passed by Sentosa and my aunt expertly named the beaches and landmarks we cruised by, which she learnt from our Segway tour.

Her adventurous side sparked by the Segway ride was evidently still there, as she bravely stepped onto the tip of the yacht for photos: 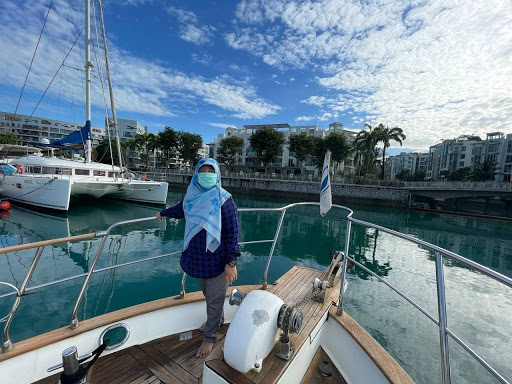 Soon, we approached Lazarus Island and its white sandy beach, Eagles Bay. True to its name, we were so excited to spot eagles flying above us!

Here, my aunt opted to relax on the yacht while my brother and I made use of the water mats, double kayak and floats.

She could not stop snapping photos of us from the yacht, and for a moment, all three of us felt like how it used to be when we were smaller and on a holiday together. 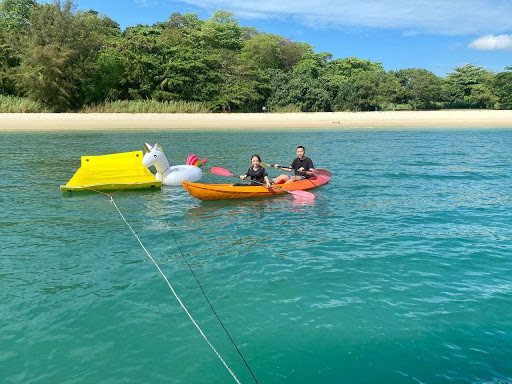 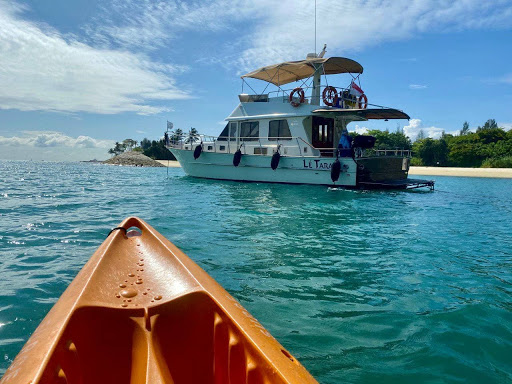 With little to no one at the beach, we felt like we had the island and its waters all to ourselves.

Time flew by and before we knew it, it was time to head back to the yacht and return to the hotel for lunch.

We had a two-course lunch at Kwee Zeen, which is also included in the Klook staycation package.

This time, we sat at the restaurant’s alfresco area to enjoy the warm breeze.

For the fourth time in two days, my aunt reiterated how she felt that she was on holiday because of the greenery and the fact that we were on an island.

She later explained that the experience reminded her of trips to Batam, with its warm weather and sea view. 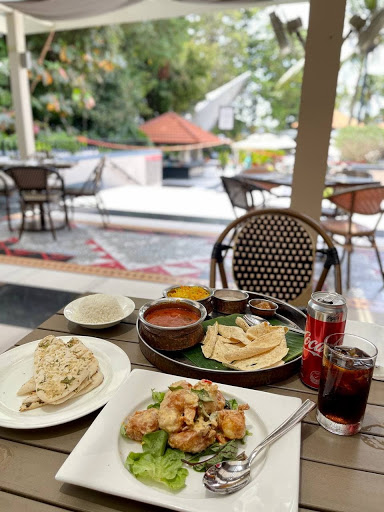 Overall, our favourite meal at Sofitel Sentosa Resort & Spa was dinner at The Cliff as we were able to try an assortment of Italian fare we would not normally go for. 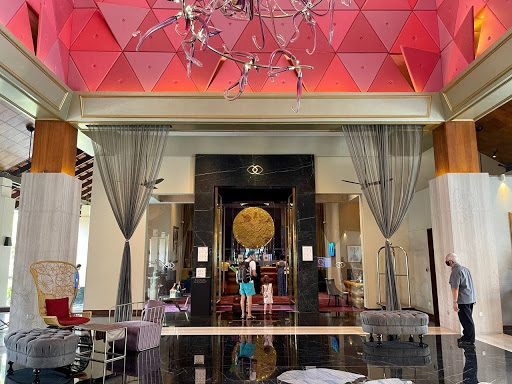 We checked out after having lunch, at around 2pm. Checkout was quick as we utilised the express checkout and dropped the room keys into a box.

In a blink of an eye, our Singapoliday had come to an end, but it was definitely one to remember.

My aunt admitted that at her age, she did not think that she could do anything remotely adventurous, like going on a yacht or riding a Segway.

However, this experience had opened her eyes to the possibilities of exploring Singapore even more.

Moving forward, she said that she would definitely be open to going on more adventures with me.

Her comment struck a chord with me, and I made a mental note to spend more time with my loved ones.

She added that she truly enjoyed exploring Sentosa island, feasting on good food and relaxing by the pool, away from the hustle and bustle of city life.

It was an enjoyable experience that made her feel like she was overseas, without the hassle of travelling for hours to get to our destination (not that we can travel now).

Further, exploring Sentosa again after so long gave her a sense of nostalgia as she recalled how the island used to be back in the day.

The quality time spent with my aunt and the memories we forged during this Singapoliday is irreplaceable.

Click here to check out more deals on Klook.

Psst.. new Klook users get to enjoy a 10 per cent off promo too.

This sponsored article by Klook in collaboration with the SingapoRediscovers campaign reminded the writer how important it is to treat your loved ones.