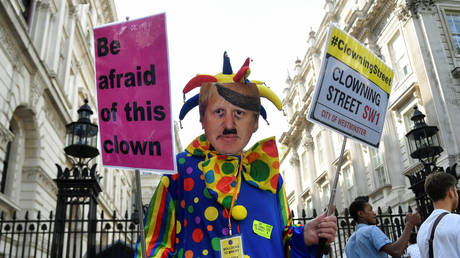 On April Fools’ Day, our normally straight-faced media and institutions let their hair down and tell a few good-natured fibs. But why would they need a special day, when they peddle such high-grade nonsense year-round?

Google may have canceled its usual April Fools’ pranks this year due to the coronavirus pandemic, but that hasn’t stopped the fest of the world trying to pull the wool over the public’s eyes. From Volkswagen rebranding itself as ‘Voltswagen’ to promote electric cars, to an Australian police department announcing its new crime-fighting sausage dogs, the tradition is alive and well in 2021.

But what about the nonsense our leaders and media peddle every day and expect us to take seriously? There’s no special day for their BS, and we’ve collected some of the finest examples they’ve come up with this year so far.

British Prime Minister Boris Johnson revealed his government’s plans to lift Covid restrictions last month, which promised a return to some semblance of normality by the end of June. However, Brits are still expected to keep each other at arm’s length until at least May, when the government will update its advice on “social distancing between friends and family, including hugging.”

The headlines may have looked ridiculous, but they were deadly serious. Hands off your loved ones until Boris Johnson says it’s okay!

The BBC has published an article which amplifies advice that people should wear face masks during sex in order to stop the spread of coronavirus.https://t.co/pqnveaKCyb

Sex is an intimate act, but with Covid on the loose, intimacy is fraught with danger. That’s why the BBC advised readers in January to mask up before they strip down. As the UK entered national lockdown at the beginning of the year, the BBC recommended that couples shut in at home wear face masks during sex, use positions that minimize face-to-face contact, and give themselves a good scrubbing and sanitizing before and afterwards.

While a small group of medical fetishists may have gotten excited at the idea, to most people, a cold shower would be preferable to doing the deed in PPE.

Many Joe Biden news items (sound like a joke)

Did you know that Joe Biden’s proposed infrastructure plan offers a “window into [his] soul”? Or that he “heals the brokenhearted and binds up their wounds”? Perhaps you haven’t heard that his romantic gestures towards his wife have “restorative” powers, or that the First Lady should be celebrated for her “successful attempt at putting on gloves while holding her coffee cup.”

You would have, if you were reading the Washington Post, Politico, MSNBC or CNN. Senior reporters at these outlets actually wrote all of the above quotes and expected readers to take them seriously. Perhaps coverage like this is why the American public doesn’t trust the media any more.

The reporters shouldn’t worry, however. They could always land a job in Pyongyang’s thriving media sector.

Last year’s Black Lives Matter protests were always given special treatment. While Donald Trump’s rallies were described by the US media as “super-spreader” events, Covid-19 apparently didn’t exist at BLM marches. Violence and looting was downplayed, with CNN infamously describing one night of mayhem as “fiery, but mostly peaceful.”

Nearly a year later, the New York Times now wants its readers to believe that the claim that “Black Lives Matter protests caused widespread violence” was a classic piece of right-wing “disinformation.”


Surely the business owners whose stores were looted and burned – and the families of the 20 people killed – will be relieved to know they were just imagining things.

The body positivity movement preys upon & exploits woman who are insecure about their weight.Telling overweight people they can be perfectly healthy without losing weight may be a great way to sell magazines, but it’s a crappy thing to do if you care about public health. pic.twitter.com/7Bot4V3G5w

Cosmopolitan, a magazine renowned for telling women to hate themselves and their partners, is now all about positivity. The February cover featured photos various obese women under the caption “this is healthy.”

Inside, the women waxed lyrical about how their obesity doesn’t hold them back from living normal, healthy lives, and how criticism of their weight was just “fatphobia.”

Back in reality, obesity is definitely not healthy. It can lead to diabetes, heart disease, strokes, body pain and mental illness, as well as an increased risk of hospitalization and death from Covid-19.

But Cosmo doesn’t want you to listen to the haters and their ‘science’ and ‘facts.’

These five examples are just the tip of the iceberg. Everything you enjoy is still racist, Joe Biden is still the most popular president who won the fairest election of all time, free speech is dangerous, and wearing two face masks is now the best way to fight off the coronavirus.

The line between satire and reality has well and truly ceased to exist.