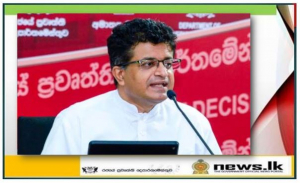 Co-Cabinet Spokesman Minister Udaya Gammanpila said that four elevated railway tracks will be constructed within Colombo City-limits and this will be initiated as a Public -Private Partnership project.

The Minister stated this at the cabinet decision media briefing (30) held at the Department of Government Information.

As the Minister asserted, the said project will be launched in order to ease the traffic congestion in Colombo and these four railway tracks have been named Raktha, Haritha, Neela, and Dam.