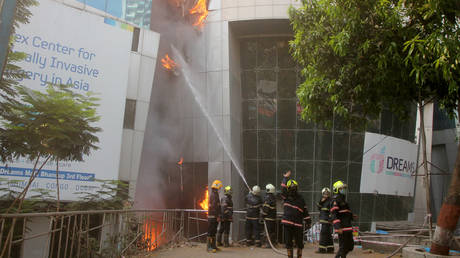 70 patients have been evacuated and 10 fatalities reported after a fire broke out at a private Indian medical facility that’s been treating Covid patients. It’s the country’s second hospital fire in recent months.

The blaze, which began on Thursday night on the ground floor of a shopping mall in Mumbai, spread up through the building to the level where the Sunrise Hospital is located, resulting in the evacuation and the reported deaths.

The medical facility was one of several in the city treating Covid patients, with at least seven individuals on ventilators. It’s not yet known if those killed in the fire were being treated for Covid or for other ailments. The remains of those who died will be identified by relatives in due course.

More than 20 fire engines were drafted in to help contain the blaze and officials on-site are investigating what caused the fire.

#Mumbai Fire 🔥Atleast 2 persons were killed when a major fire broke around midnight at Sunrise Hospital a dedicated #Covid19 hospital at Bhandup.The hospital is situated on the third floor of Dreams Mall on the busy LBS Road which has been shut for traffic. pic.twitter.com/tDYPzluhlz

The incident is the second time in recent months that an Indian hospital with Covid patients has had a major fire break out. In August 2020, a blaze in the critical care unit of a facility in India’s western city of Ahmedabad resulted in the deaths of eight patients and required 40 patients to be transferred to other locations to continue their treatment.


India has been suffering from a surge in Covid cases, with 59,118 reported in the past 24 hours, taking the nation’s total to 11.8 million, the third highest tally globally. Mumbai, in particular, has been a hotspot for cases, accounting for 5,500 of the country’s total cases on Thursday alone.