Dating back to the 2nd century BC, Kuragala is a pre-historic archaeological site with ruins of an ancient Buddhist Cave Temple Complex. Located on the *Balangoda – Kaltota Road approximately 24 kilometers from Balangoda town, Kuragala is derived from “hollow rock” in Sinhala. According to historians, during the Anuradhapura Kingdom, Kuragla was known as ‘Thanduleika pabbatha’ and ‘Daththa shaila pabbatha’. Later, it had been known as “Kuharagala” from which the present Kuragala has derived.

According to archaeologists, Kuragala is the oldest archaeological site in the *Intermediate Zone. According to archaeological evidences, Kuragala had been inhabited by humans dating to pre-historic period. During the excavations carried out by archaeologists, they have found fossilized bone fragments, remains of a human skeleton dating more than 8000 years and stone stools. There is also evidence that humans who lived in Kuragala had close links with the coastal areas of Sri Lanka as there had been remnants of seashells and shells of clams in the excavated site. According to recent studies, apart from hunting the prehistoric humans had engaged in agricultural activities too.

Inscriptions in the rock caves at Kuragala are brief descriptions; ‘Agatha anagatha chathu disha shagasa dane’ meaning the caves were offered to ‘whoever the Sangha (meaning Buddhist Monks) who come or do not come from the four directions from the past or the future’. In the vicinity of the Kuragala Mountain Range also, there are several ancient rock caves.

According to archaeologists, rock caves at Kuragala had been the abode of *Balangoda Man (Homo sapiens balangodensis) during the prehistoric period. Available evidence regarding their habitat also indicates that these prehistoric humans have built settlements in open areas too. Subsequent to the pre-historic era, from the beginning of the Anuradhapura Era rock caves in Kuragala have been inhabited by ascetic Buddhist Monks. Subsequent to the *Anuradhapura Period, Kuragala had been abandoned due to enemy invasions and there had not been an access path to reach the rock caves and the Monastery Complex. Hence, in 1925, Venerable Vikiliye Narada Anunayake Thero who lived in a temple in Vikiliye, situated in close proximity to Thanjanthenna had gone to Kuragala by cart and he has found that the dagoba was about two meters in height with three terraces at the base on the summit of the Mountain and the foundation of an ancient building approximately 10 meters long located in close proximity to a small stream. Venerable Narada Thero had also found a Buddha Statue inside the Cave Temple.

An archaeological report published by C.H. Collins in 1932 has described about the cave shelters, 2nd century *Brahmi inscriptions, inscriptions written in old Sinhala Language, stairways, platforms as well as carved stone lintels. Collins has published his interpretations of Kuragala inscriptions which were reread and republished in Inscriptions of Ceylon Vol. I. of the Department of Archaeology.

According to research carried out by epigraphers and archaeologists, the inscriptions in the caves had descriptions that the cave shelters were done for Buddhist Monks from donations as the cave shelters provided shelter to Monks during the rainy season. According to epigraphists, the drip-ledge caves indicate that they were built for meditating monks. The names of donors had also been inscribed in the caves.

There is a brick built daogba (stupa) at the summit of Kuragala belonging to the tradition of Akasa Chaitya, a stupa tradition built since 7th century CE which archaeologists believe would have served as a communication beacon to give directions. At present, this stupa is a monument protected by the Department of Archaeology. 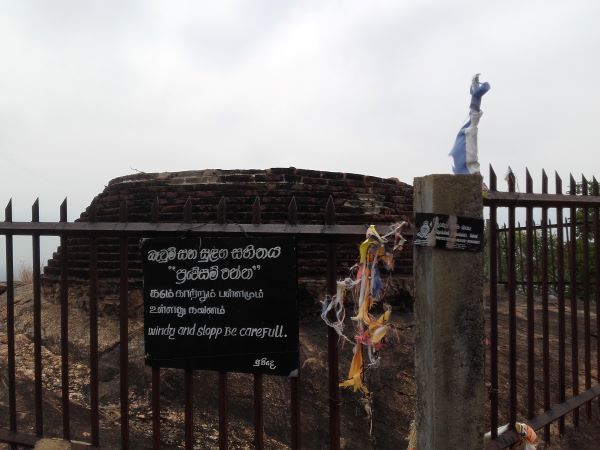 According to a record by Government Agent of Ratnapura, R.B. Hellings published in 1910:

“The ledge you scramble over the side of the cliff a few yards to the mouth of the cave. Entering this you find on the right gallery too low to explore and the left is a narrow chimney rather like a shaft inside the great pyramid, down which you crawl until you emerge upon the Porch of Penitence (Ledge). This is a lofty loophole or ledge window in the side of the precipices, overhung by an immense boulder and opening on the sky and the plane below. It is a dizzy spot. The window sill or platform is barely six foot by four foot. And the drop must be a sheer 500 feet. Lamp niches have been cut in the walls in very perilous positions, and there are as in Hituwanagala, inscriptions and palm prints on the stone.”

R.H. Bassett has referred to the “ledge” in ‘Romantic Ceylon’ as follows:

“Here seated beneath a huge mass that towers fifty feet above on the edge of a 600 foot precipice, a hermit can find solitude indeed and food for contemplation in the unbroken ocean of trees spread out below him. Entering from a small hole in the rock at the back, an atmosphere of complete detachment pervades the occupant of the tiny ledge. Earthly considerations lose their importance before the uncomplicated immensity of the colossal landscape and the fatality of the sheer abyss”. 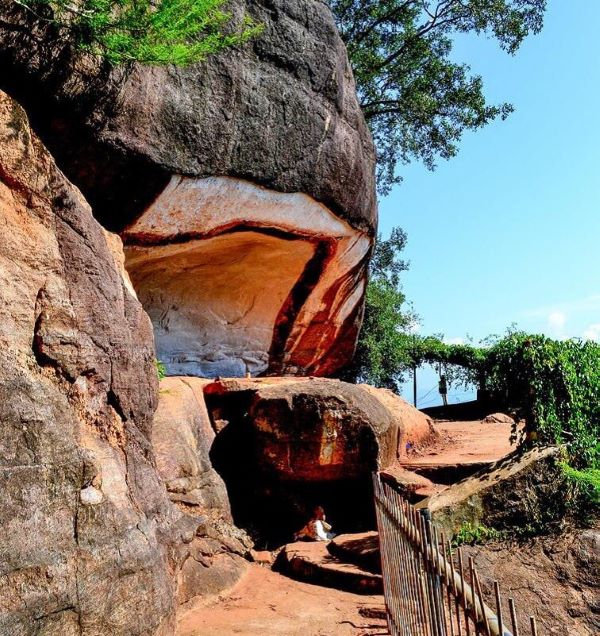 The “opening on the sky and the plane below” as mentioned by R.B. Hellings refers to the crevice and sun light filtering inside from below, (as the Cave referred to in the document) is situated on top of Balangoda Plateau as well as Kaltota Plains situated approximately 152 meters below.

At present, Kuragala is an archaeological reserve protected by the Government of Sri Lanka.

Travel to Belihuloya along the Colombo – Ratnapura Road and then along the Kalthota Road passing Aluthnuwara and Kahatapitiya up to Kalthota to reach the Kuragala Cave.