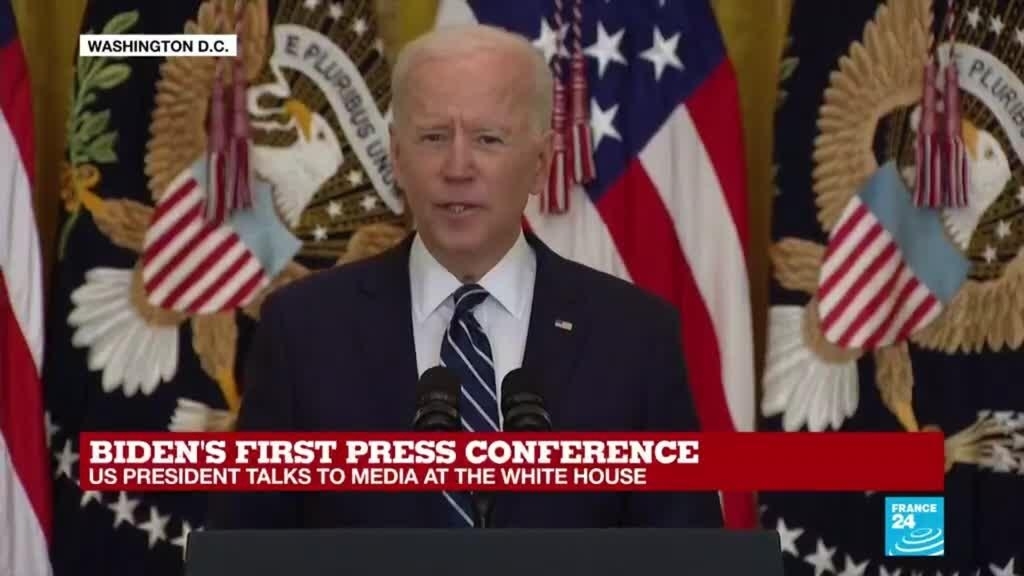 US President Joe Biden pledged to have 200 million doses of Covid-19 vaccines administered by the end of his first 100 days in office at his first formal news conference since his inauguration in January. Watch FRANCE 24’s live coverage here.

Biden’s goal seems ambitious, but it actually amounts to a continuation of the country’s existing pace of vaccinations through the end of month. The US is now averaging about 2.5 million doses per day.

A higher vaccination rate seems achievable. Over the next month, two of the bottlenecks to getting Americans vaccinated are set to be lifted. The US supply of vaccines is on track to increase and states are lifting eligibility requirements for people to get the shots.

The “fundamental problem is giving people piece of mind” amid a Covid-19 pandemic that has caused more than 500,000 deaths, Biden said.

When asked about the intense polarisation in US politics – with Biden’s $1.9 trillion Covid-19 stimulus bill passing the Senate on party lines – he said: “I would like elected Republican support but what I have now is support from Republican voters.”

His Covid-19 relief bill was similar in size to Trump’s proposal, which was ditched amid lawmakers’ opposition towards the end of his presidency.

A pair of mass shootings, rising international tensions, signs of divisions within the Democratic Party, new North Korean missile tests and a large increase in numbers of migrants crossing the USA’s southern border are all confronting a West Wing known for its tight message discipline.

When asked about the growing influx of migrants, Biden said that the “way to deal with this problem” is to “deal with the root causes of why people are leaving” – as well as emphasising that the US is sending back the “vast majority” of people coming across the Mexican border.

Biden said that “all” illegal immigrants should be “going back” except for children, and that his administration is “in negotiations” with Mexican President Andres Manuel Lopez Obrador to encourage the US’s southern neighbour to take more people back.

As debate rages over the Senate filibuster – a major source of the US’s political gridlock – Biden said that “it is being abused” and reiterated his call for bringing back the so-called “talking filibuster”, in which Senators have to stand and talk for as long as it takes to block a bill instead of being able to do so with the mere threat of the filibuster.

When a journalist asked Biden if he agreed with his former boss Barack Obama that the filibuster is a “relic of the Jim Crow era”, the president said he agreed. But he reiterated his support for reforming, not abolishing, the filibuster, saying that “successful electoral politics is the art of the possible”.

Biden said he has “never been particularly poor in getting things done in the US Senate” – after serving in the upper chamber from 1973 to 2009 – and that “if there is complete lockdown and chaos in the Senate as a result of the filibuster, we’ll have to go beyond what I talked about”.

From Afghanistan to Xi Jinping

On foreign affairs, Biden said his May 1 deadline to withdraw US troops from Afghanistan would be “hard” to meet amid the Taliban’s resurgence – but underlined that “it is not my intention to stay there for a long time”. He said he “can’t picture” it “being the case” that US soldiers will still be there next year.

In response to North Korea’s new ballistic missile tests on Thursday, Biden warned that “there will be responses if they choose to escalate” – while adding that he is “also prepared for some diplomacy” – although it has to be “conditioned” on moves towards “denuclearisation”.

Biden said he was going to “invest in the American people and American science” to counter China’s challenge to US hegemony. “China is out-investing us by a long shot”, he warned.

“Re-establishing our alliances” after Trump’s “America First” approach is another means by which Biden says he hopes to deal with the authoritarian China’s rise. “We have to have democracies working together,” he continued.

Biden said he “pointed out to [Chinese leader Xi Jinping] that no leader” can remain in office “unless they reflect the values of their people” and that “the moment a US president walks away from speaking out” about abuses like China’s repression of Uighurs and Hong Kong, “we lose our legitimacy”.

The president said he knew Xi well from his role as Obama’s number 2. “He doesn’t have a democratic – with a small ‘d’ – bone in his body, but he’s a smart, smart guy,” Biden said.

Biden is the first president in four decades to reach this point in his term without having conducted such a question-and-answer session. The president met with reporters for the nationally televised afternoon event in the East Room.

The US president has been on pace with his predecessors in taking questions from the press in other formats. But he tended to field just one or two informal inquiries at a time, usually in a hurried setting at the end of an event or in front of a whirring helicopter.

Pressure had mounted on Biden to hold such a formal session, which allows reporters to have an extended back-and-forth with the president. Critics have pointed to the delay to suggest that the 78-year-old president’s staff were shielding him.

Despite his advanced age, Biden said at the press conference that his “plan is to run for re-election” in 2024.

(FRANCE 24 with AP and REUTERS)

Click on the video player above to watch FRANCE 24’s live coverage.