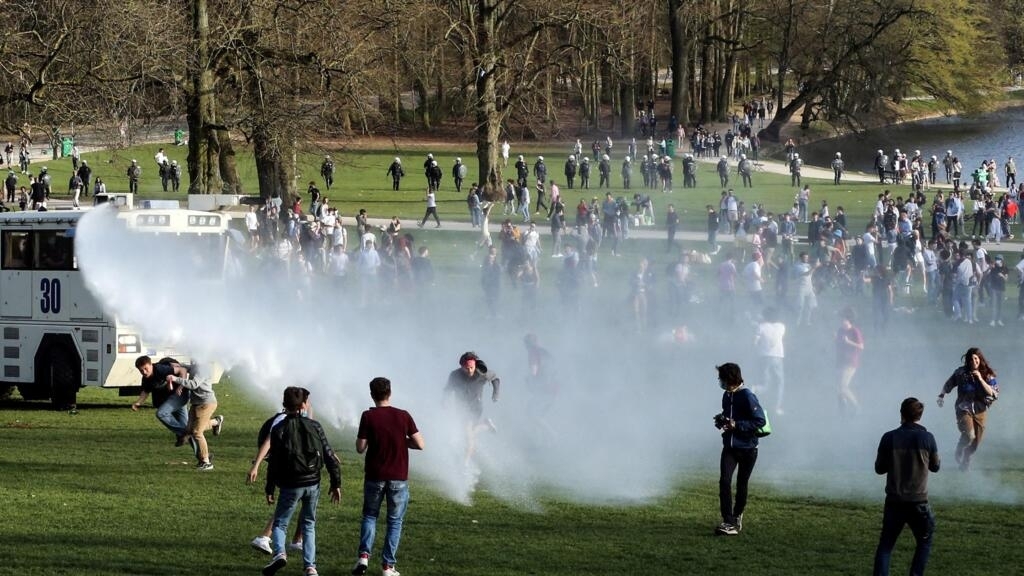 Belgian police clashed with a large crowd Thursday in one of Brussels’ biggest parks after thousands of revellers gathered for an unauthorized event despite coronavirus restrictions.

Brussels police told The Associated Press that four people were arrested and three police officers were injured. Clashes started after police ordered the crowd to disperse toward the end of the afternoon. An AP reporter saw people throwing bottles and other projectiles at police, who used water cannons and tear gas to disperse the crowd.

The festival, dubbed “La Boum” (“the party”), had been advertised on social media and police had warned it was a fake event on April Fool’s Day. According to Brussels police, up to 2,000 people still showed up in the Bois de la Cambre to attend.

Large crowds have been gathering in Brussels parks this week to enjoy the unusually sunny, warm weather, despite coronavirus restrictions limiting outside gatherings to four people. Brussels prosecutor’s office had said police would be deployed at the festival and that anyone breaching restrictions could be prosecuted.

Another event has been advertised for Friday in another Brussels park, promoted by a group called the Abyss. The group said it does not question the government’s strategy but fights for citizens’ rights to gather outdoors.

Belgium has reported over 882,000 confirmed coronavirus cases and more than 23,000 virus-related deaths. Hospitalizations due to COVID-19 have risen in recent weeks and health authorities have warned that intensive care units could reach a critical level by April 10 if the pace of new infections and hospitalizations does not slow down.

Belgium’s current virus restrictions include a night-time curfew and a ban on nonessential international travel.