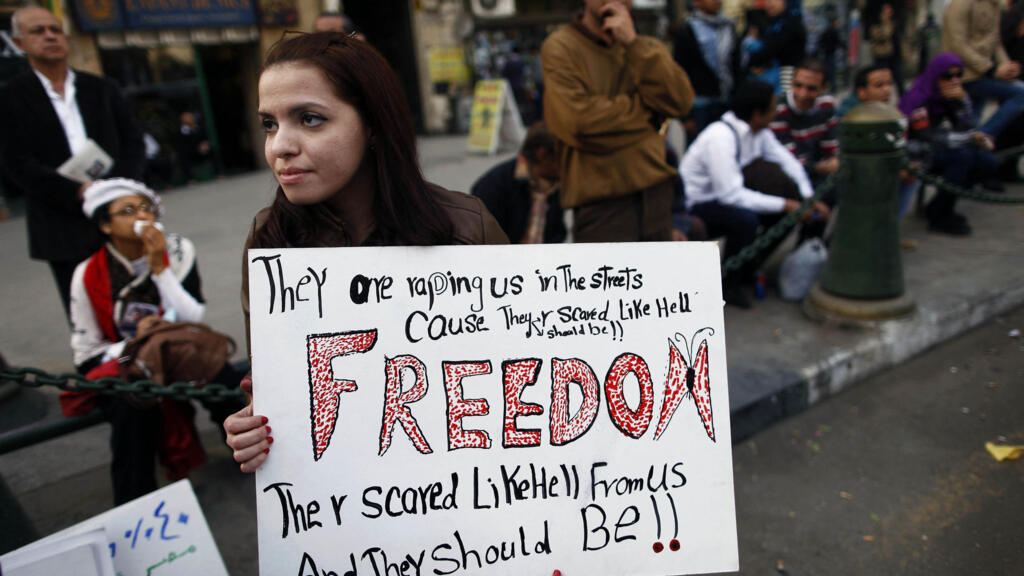 While, on the one hand, the Egyptian feminist movement seems to be taking great strides forward, particularly on the grassroots level, with young women inventing new forms of activism to draw attention to endemic sexual violence that plagues them both in their homes and on their streets, the government is moving to further curb women’s autonomy.

In January, the Egyptian cabinet approved a personal status bill that would require women to get the consent of a male guardian to get married, to register a child’s birth or to travel abroad. The draft law also gives fathers priority in child custody matters (currently mothers are given priority) and allows fathers to prevent mothers from traveling with their children.

In matters of marriage, a male guardian such as a father or a brother would sign the marriage contract, not the wife, and he would have the right to file to annul the marriage within a year.

Nehad Abu El Kosman, head of the Egyptian Center for Women’s Rights, called the bill “repressive” and “patriarchal” in a video statement. “We completely reject this shocking draft law,” she said. “It takes us back 200 years.”

El Kosman said the bill doesn’t reflect the reality of Egypt today, where 18.1 percent of women are the head of their households.

Entisar Elsaeed, the founder and director of the Cairo Foundation for Development and Law, said that any new personal status laws should treat men and women equally. Custody cases should be decided in accordance with international law, educational guardianship should be shared, and women should be allowed to move freely without needing their husband’s permission. They should have self-determination over their bodies, both in terms of health and in marriage. The system of female obedience must be abolished, she said. “It is inconceivable that women will be treated in this humiliating manner in the 21st century,” she wrote in an email.

The bill is currently under review and has not yet been formally presented to parliament for ratification. It has not been presented to civic groups for feedback.

In reaction to the proposed changes, women turned to a proven outlet, launching a Twitter hashtag in opposition of the measure, #Guardianshipismyright. They flooded the social media platform with stories about instances in which current laws and social mores have already prevented them from making decisions for their children or for themselves, even on matters of their own reproductive health. Further restrictions would make matters even worse.

A recent court case highlights one of the problems inherent in the proposed law. A woman named Amal Abdel Hameed, who says she was raped, is currently in the final stage of appeal to have the name of her two-year-old daughter’s father – her alleged rapist – listed on the girl’s birth certificate. The father’s identity has been confirmed by a DNA test. Current law does not mandate paternity registration for children conceived out of wedlock, so under the vagaries of Egyptian law, obtaining a rape conviction is essential in order to have the father’s name listed in the registry. Without a male guardian to register the child, she will not be able to get an official birth certificate, which will lead to bureaucratic problems throughout her life, Elsaeed said.

Women’s rights activists have also been speaking out of late against discriminatory practices within the judicial system, where women are effectively barred from applying for entry-level positions. As of last year, out of more than 12,000 judges in Egypt, only 66 were women.

After herself suffering gender discrimination, Omnia Gadalla, a young law graduate, tried to address the imbalance by filing two lawsuits –which she both lost – and founding the Her Honor Setting the Bar initiative, which works to fight the discriminatory ban on women in the judiciary.

After a March presidential decree issued called for greater representation of women in the judicial system, women were given a two-week window during which they could apply for 40 to 50 mid-level positions within the State Council, but only those employed by the State Lawsuits Authority and the Administrative Prosecution were eligible.

The government may be moving to curtail women’s freedoms, but on a grassroots level, women, particularly young women, are becoming increasingly vocal in their demands. Most notably, they have taken to social media to try to get justice for themselves in a nation where sexual harassment and sexual violence are rampant and little is done about it. Through Twitter, Instagram and Facebook, they are forcing the issue of consent into the mainstream and challenging the prevailing and widely internalised view that sexual harassment and rape are the fault of the women on the receiving end.

Historically, women in Egypt have been reluctant to report rape or harassment because they were seen as having invited the attacks. Having been subject to such abuse brought shame on the women, and police would sometimes further abuse them, seeing them as “damaged goods”, said Mona Eltahawy, author of the Feminist Giant newsletter.

“When this wave of the movement happened, it made me so proud,” said Mozn Hassan, founder of Nazra for Feminist Studies. “But what’s after speaking up? Speaking up is a tool.” The key is creating an environment in which women are safe, she said.

Eltahawy sees these young women’s efforts as the continuation of the incomplete 2011 revolution. During the uprisings that overthrew longtime president Hosni Mubarak, women were told that it was not the time for them to come forward with their concerns, that there were more pressing issues to be addressed. Because of that, the revolution was only a partial one, Eltahawy said, with women being left out. “The state oppresses everyone, men and women,” she said. “I consider this to be the feminist revolution, at last.”

Substantive progress will require structural change, Hassan argued, and for that to happen there needs to be a free civic sphere, which can’t exist in a country with the repressiveness of Egypt. “If you want a structured, long-term, diverse [feminist] movement, you need a public sphere,” she said. “You don’t get that if you’re not secure… anyone speaking up can be jailed tomorrow.”

Still, Eltahawy finds encouragement in the new openness in discussing sexual pleasure and desire – subjects that, in a country where more than 87 percent of women between the ages of 15 and 59 have been subject to genital cutting, which deprives women of vaginal sensations, hardly warranted a mention in the past.

The conversations are now about consent and agency, and that goes beyond the freedom not to be assaulted. “That consent and agency and ownership of my body means I have the right to have sex whenever and with whomever I choose,” as long as that whomever is also a consenting adult, Eltahawy said. “We have a right to be free of sexual violence. We have a right to desire and pleasure.”

The activism is an early step in a long journey, Eltahawy said, and measures such as the personal status bill are to be expected, as the trifecta of power over women – the state, the street and the home – feels it is losing its grip. “They realise they are on a precipice,” she said. “The freer women demand to be, the more regressive Egyptian laws will become.”

Ultimately, she said, “the feminist revolution will erupt and it will be unstoppable, no matter what laws they pass.”