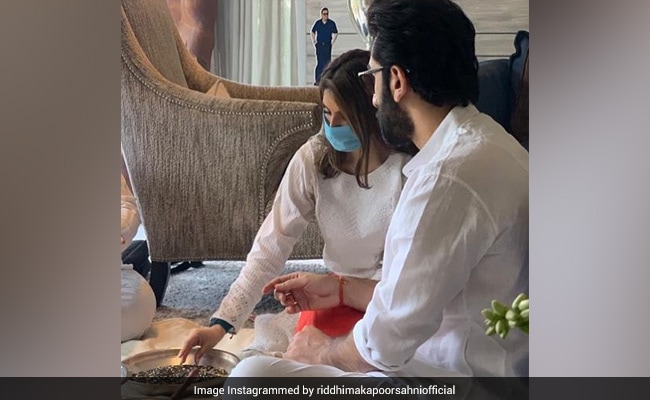 Rishi Kapoor’s family organised an 11-month prayer meet for the late actor at their Mumbai home on Thursday. Rishi Kapoor, who was one of the most loved and respected actors in Bollywood, died after battling cancer on April 30 last year. He was 67. On Thursday afternoon, the late actor’s daughter Riddhima Kapoor Sahni posted a picture of herself and her brother, actor Ranbir Kapoor, from the close-knit prayer meet. In the photo, Ranbir, who is currently recovering from COVID-19, and Riddhima can be seen sitting on the floor and performing a puja. A photo of Rishi Kapoor can also be seen behind them. Riddhima’s emotional caption for the photo read “Always watching over us! We miss you.”

Earlier in the day, Rishi Kapoor’s wife, actress Neetu Kapoor, remembered him by sharing a beautiful memory from their last trip to New York. Rishi Kapoor was diagnosed with cancer in 2018 and he went to New York for the treatment the next year. He returned to Mumbai in September 2019 and after few months, died at the HN Reliance Foundation Hospital.

Sharing the throwback video, in which Rishi Kapoor can be seen singing, Neetu Kapoor wrote: “Since today is Rishiji’s 11-month prayer meet felt like sharing some moments from our last trip to NYC.”

Riddhima Kapoor Sahni also shared a family photo on Thursday and wrote this heartfelt note for Rishi Kapoor: “Your love will light our way – Your memory will forever be with us! Always in our hearts.”

Rishi Kapoor was known for his performances in films like Bobby, Rafoo Chakkar, Khel Khel Mein, Laila Majnu, Prem Rog, Saagar, Nagina, Honeymoon, Chandni, Heena, Bol Radha Bol and Kapoor And Sons, to name a few. He was last seen in the 2019 film The Body.